HALF DAY
APOPO, a demining center that uses ... giant rats also known as HeroRat, experience the realities of humanitarian demining and how they train rats to save lives and learn about the mine clearance process . You will then See a HeroRAT in action on a demonstration area where he will sniff out buried items.

THANK FOR YOUR INTEREST

Leave us you email 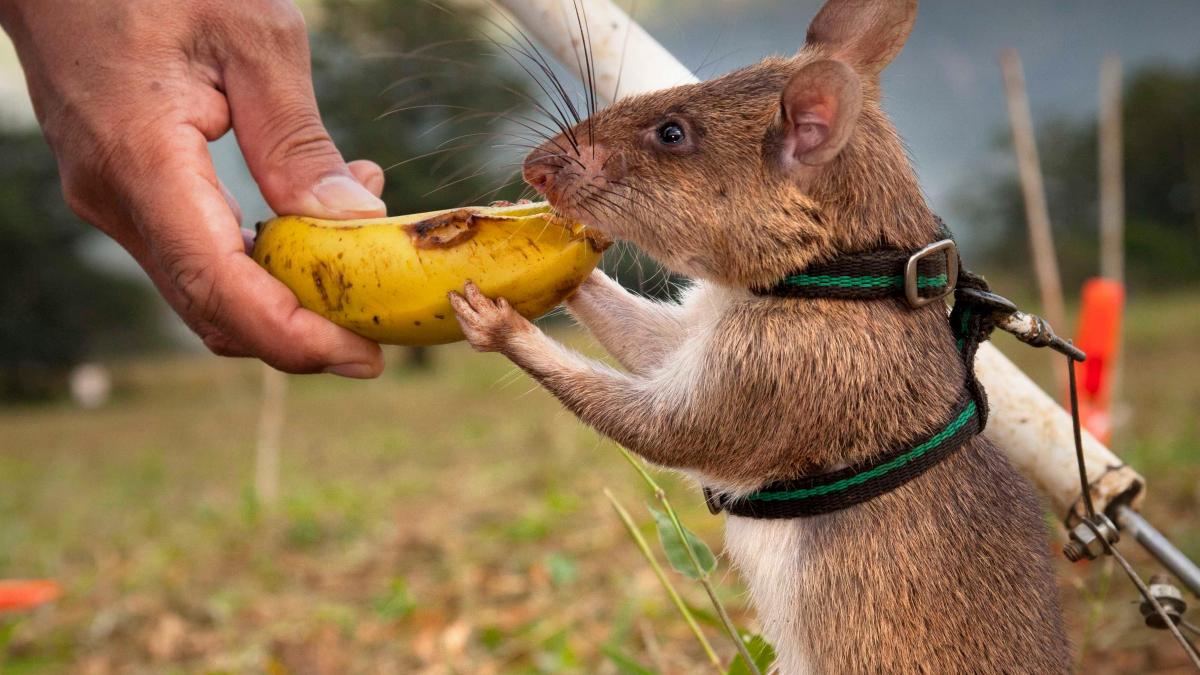 Learn with APOPO about the downplayed issue of productive lands being still to this day endangered by explosive remnants of war and their unique process of safe demining.

Over 60 countries are still contaminated with hidden landmines and other explosive remnants of war that cause tragic accidents and hamper communities from developing their productive land.

APOPO is a demining center that uses giant rats, nicknamed “HeroRATs”, trained to detect landmines, helping the team to get rid of the deadly devices and give back safe lands to the communities.
This excursion is an unmatched opportunity to encounter the realities of humanitarian demining and the crucial roles of these little rodents.
You’ll observe how the HeroRats are trained to save lives and learn about the mine clearance process in Cambodia.

Ultimately, the most exciting experience is witnessing a HeroRAT in action, sniffing out buried items in a demonstration area.

Morning or evening, available everyday except weekend,
Pick up at your Hotel
Private Tranfer
From 3 year Old
Local Tour Guide

WHAT IS THE CURRENCY AND CHANGE?

The RIEL is the national currency. But the US Dollar is also accepted throughout the country and prices are generally displayed in Dollars. The exchange rate is relatively stable: 1USD=4000 Riels. Warning: banknotes printed before 1990 are not accepted in Cambodia and their value decreases if the banknote is torn or scratched or graffitied or folded. In the case of a payment in Dollar, the change will be returned to you in Riel. The Euro and other foreign currencies are easily exchangeable in airports and markets.

Credit cards are now widely used in tourist cities (Siem Reap, Phnom Penh and Sihanoukville) and you can withdraw Dollars. Cash withdrawals are possible in major cities in Laos, with a credit card (Visa or American Express). Payments are also possible in some hotels, luxury shops, or restaurants. But the cost of the levies (variables) remains quite high (3% commission). We recommend that you carry cash to cover your personal expenses throughout the trip.

HOW IS THE ECONOMY ENVIRONMENT?
The Khmer kingdom of Cambodia reached its peak in the 12th century. Agriculture remains the dominant economic sector (57.6% of the working population). Cambodia’s main industries are clothing and tourism (more than 2 million in 2007/08). Oil and gas were discovered in the country’s territorial waters in 2005. Despite the extreme poverty of a large part of the population (31% below the poverty line), Cambodia has experienced strong economic development since the late 1990s, with an average GDP growth rate of 10% per year between 2004 and 2007.
WHAT ARE LOCAL GASTRONOMY CHARACTERISTICS?
Cambodian cuisine blends Vietnamese, Thai, Chinese and French influences. The food is based on rice and soups. There are more fish dishes (caught in the Tonle Sap or Mekong) and chickens than buffalo and pork meat. Among the many exotic fruits, mango and pineapple have a unique taste in Cambodia.
WHAT IS THE GEOGRAPHY?
Cambodia is surrounded by Thailand, Laos and Vietnam. Its area is of 181 035 km2 and its sea border, 443 km long, overlooking the Gulf of Thailand. It has three large mountain ranges: the Elephant Mountains to the south, the Cardamom Mountains to the west and the Annamite Cordillera to the east.
WHAT ARE THE RELIGIONS?
State religion since 1989, Buddhism Theravada has 14.2 million followers, or 96.4% of the population. The other religions are Islam (2.1% of the population, most of whom are Chams), Christianity (1%, practiced by many Vietnamese and some Khmer). Most holidays are celebrated on the same dates every year, and some festivals like the Khmer New Year, Pchum Ben and the Feast of Water follow the lunar calendar and move a few days before or after each year.
DO I NEED VACCINATION OR HEALTH CHECK BEFORE?

No vaccination is required. However, it is recommended to protect yourself against hepatitis A and B (ask your doctor for advice). We advise you to bring your own:

of a broad-spectrum antibiotic;
of your usual medications if you are undergoing treatment;
an anti-diarrheal and an intestinal antiseptic (Intetrix, Immodium…);
a protective cream against mosquitoes;
moisturizing sunscreen, lip stick;
a healing ointment and a local antiseptic.

CAN IN DRINK TAP WATER?
Water is not drinkable in Southeast Asia. Avoid tap water, require bottled water. It is harmless and safe to brush your teeth, but do not drink it.
WHAT IS THE RECENT HISTORY?

The Khmer kingdom of Cambodia reached its peak in the 12th century when great temples were erected, but the struggles between Hindus and Buddhists, Khmers, Mon and Cham tore the kingdom apart. The Siamese gradually established their political control over the Khmers while the Vietnamese also sought to dominate and colonize Cambodia. In 1863, France offered its protection to Cambodia, once again threatened by the Siamese (Thais). King Norodom I accepted the protectorate and Cambodia became a French colony. It was only after the Second World War that King Norodom Sihanouk negotiated with France the independence of Cambodia, which was granted on 9 November 1953.

After 15 years of reign, the king could not prevent the Khmer Communist Party from starting the armed struggle in 1968. In 1970, a military coup d’état precipitated Cambodia into a civil war that ended in April 1975 when the Khmer Rouge seized Phnom Penh. The brutality of Pol Pot’s troops served as a pretext for the Vietnamese to invade the country in December 1978.

They left the country following international pressure in September 1989. In May 1993, multi-party parliamentary elections were held. A new constitution was ratified and Norodom Sihanouk was once again proclaimed king. In 2004, he abdicated in favour of his younger son Norodom Sihamoni, currently in charge of the kingdom.

WHICH LANGUAGES ARE SPEAKING?

Khmer (sometimes called “Cambodian”) is the official language, with a clear majority; it is estimated to have 11.2 million speakers, or 83.6% of the population, according to 2012 figures, far ahead of Vietnamese (1 million speakers), Cham (475,000 speakers) and Chinese (438,000 speakers). It is mainly spoken in Cambodia and the neighbour regions of Thailand by the Surin Khmer (northern) and in Vietnam by the Khmer Krom.

HOW IS NETWORK & INTERNET CONNECTION?
The mobile phone network now covers a very large part of Cambodia. You can therefore use your mobile phone in Cambodia, it is no longer necessary to acquire a chip when you arrive. In addition, the Internet has made its entry into daily life. Most tourist sites are equipped, hotels and restaurants have Wi-Fi.
WHAT ARE COMMON SOUVENIRS?
Cambodian craftsmanship has practically disappeared during the Khmer Rouge period and is slowly coming back to the surface. The country now offers a reasonable choice of handicrafts that can be found on the markets, in the shops or directly within workshops. The most popular souvenirs are silks and textiles, Kampot pepper, gold and silver jewelry, basketry and souvenirs from Angkor.
DO WE NEED TO TIP?
Tips are not mandatory but are always appreciated. They should be used as a token of appreciation. If you are satisfied with the service, it is customary to tip the guide and driver. Plan about 3 dollars/day per person for a guide, half for a driver. Not tipping is better than giving a paltry amount that can be perceived as humiliating by some.
USE OF CAMERAS
No special rights to pay for photographing or filming in Cambodia, except in Angkor where the use of professional material is subject to authorization. In some places, photos are prohibited … thank you to carefully follow the instructions on this subject, to avoid any inconvenience.
WHAT IS THE VOLTAGE?
220 V with several possible socket types: two flat plugs, two round plugs or three plugs. Plan to bring a universal adapter. Power cuts are frequent throughout the country due to aging distribution network that is not adapted to today’s needs.
WHAT ARE COMMON VALUES AND PRINCIPLES?

On your way, you will often have the opportunity to meet local people. Wherever you are, be discreet and humble. The multiplicity of cultures and traditions means that certain attitudes are perceived differently in different countries. To avoid being disrespectful, take the time to understand the people you meet, take the time to make connections.

There too, listen to the advice of your guide! He knows better than anyone the behaviors to avoid or adopt. For example, if you want to take a picture of someone, always ask them for permission. The best way for acceptance is to have established a prior contact. Similarly, do not distribute gifts at all … This often encourages children to beg, to avoid this kind of drift, it is better to refer to the local structures competent (donate to school, hospital, village chief etc.). Finally, be careful not to wear too light clothing (short shorts, cleavage …) and avoid exuberant behavior.